Staph is the shortened name for Staphylococcus, a type of bacteria. These bacteria can live harmlessly on many skin surfaces, especially around the nose, mouth, genitals, and anus. But when the skin is punctured or broken for any reason, staph bacteria can enter the wound and cause an infection.

There are more than 30 species in the staph family of bacteria, and they can cause different kinds of illnesses — for example, one kind of staph can cause urinary tract infections. But most staph infections are caused by the species Staphylococcus aureus (S. aureus). S. aureus most commonly causes skin infections like folliculitis, boils, impetigo, and cellulitis that are limited to a small area of a person’s skin. S. aureus can also release toxins (poisons) that may lead to illnesses like food poisoning or toxic shock syndrome. (Kids Health) Nutrition support only.
Reprinted from Sunshine Sharing 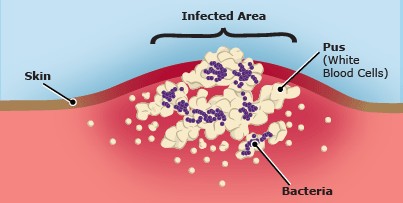 Whatever the cause or whatever the disease, we can address the problem by certain general standards which help the body generally.
For starters, certain emotions can depress your immune system. Depression is one.
Excessive stress is another. Fear, worry and anger likewise deplete our immune response.
Eating junk food weakens every part of the body, including our immune system. Eating refined sugar, for example, can increase our susceptibility to infectious microbes for several hours.
Lack of sleep and exercise may also increase our susceptibility to disease. Mild exercise keeps the lymphatic circulation going, which is vital to the immune system.
Of course, external cleanliness is also important. Warm or hot showers (depending on a person’s strength to endure heat) cause the pores to open and various body toxins to be removed through the perspiration and washed away. An internal “washing” in the form of an enema is often helpful as well.

Once you have recovered, you’ll want to maintain your immune system’s ability to keep you well. Most important right at first is not to overexert yourself. This is extremely dangerous, causing you to wind up sicker than before. People go back to regular activities and stresses when there may be residual pockets of infection still in the system. These may break out again and in the person’s weakened state they may completely overwhelm the immune system and even kill the host.

Silver Aquasol technology, the basis of our Silver Shield, kills bacteria, viruses, mold, and other pathogens on contact! It usually takes 2-6 minutes for silver to destroy 99.9% of these pathogens. Tasteless, it is safe to take Nature’s Sunshine Silver Shield TM, every day, either for prevention or to treat an infection of some sort.

Preventative dose drink 1 teaspoon per day and allow its broad spectrum activity to kill bacteria, viruses, and yeast in your body.
If you are getting sick or going to be exposed to illness, are traveling, or under stress take 1 teaspoon 2 times/day

These doses are for a 150 pound adult, and may be adjusted according to body weight. Silver Shield may be safely used by children, the elderly, and even pets in place of prescription antibiotics. Taken with antibiotics, Silver Shield TM prevents the body from becoming antibiotic-resistant. This new technology is also patented (US Patent #7,135,195, Nov 14, 2006) and being used by the Center for Disease Control. While it is encouraged to drink Silver Shield TM daily to provide silver in the blood stream, it is equally important to administer the silver through sprays or drops for topical use, or in the orifices of the body as needed. These methods may be used concurrently.

All of the above help the body fight the war and repair the damage quickly. But what can we specifically use to kill the germs? There are three single herbs which stand out as aids in infection.
Here they are:

Golden Seal has been one of the most popular infection-fighting herbs for years. It was recognized at one time as an “official” remedy for mucous infections, inflammatory conditions, infectious diarrhea and other ailments in the United States pharmacopoeia. It contains two major alkaloids, berberine and hydrastine, which have been used to combat a wide variety of infectious agents.
Goldenseal extracts have been shown to be effective against staph, strep and E. coli bacteria. It has also proven effective against giardia, a parasite which causes diarrhea. It is most effective when used temporarily for acute infections. Long term use of goldenseal may cause B-vitamins to be malabsorbed resulting in fatigue and listlessness. Excessive doses may also adversely affect friendly bacteria in the colon. Golden seal lowers blood sugar levels, so persons suffering from hypoglycemia would be better off choosing another herb.

A good alternative is Oregon grape root, which contains similar alkaloids and thus has similar infection-fighting qualities. Oregon grape has another advantage over golden seal—it is more plentiful and hence, cheaper.

Echinacea has been widely studied in Europe where it was found to have many benefits in enhancing immunity. Studies have shown that echinacea helps prevent the spread of infection, because it inhibits an enzyme secreted by bacteria to break down the “cement” which binds the cells of the body together. It promotes the production of white blood cells and stimulates Tcell activity. It may also stimulate interferon production and help to sedate viruses.This plant was also an “official” remedy in the U.S. until shortly after the turn of the century. It has been used to treat numerous infectious conditions, including abscesses, blood poisoning, gangrene and wounds. The best news is that this amazing herb has no known side effects. Combination product Echinacea/Golden Seal also comes in liquid form.

Because the stimulating action of echinacea is short-lived, it is best taken in small, frequently repeated doses as often as every hour or two.

Another plant, Parthenium integrifolium, has been sold as echinacea for many years and people appear to have had good results with it. There has been at least one study which suggests that this plant may also have immuno-stimulant properties, but very little actual research has been done on parthenium. So, for general infection fighting, E. purpurea is the best choice.

Garlic is the last single herb in our infection-fighting arsenal. Garlic has been dubbed “nature’s penicillin.” It is more powerful against gramnegative bacteria than penicillin. One milligram of allicin, its major constituent, is equal to fifteen standard units of penicillin in strength. It has proven effective not only against bacteria like staph and strep, but also against parasites, viruses and even Candida albicans. Its aromatic components quickly reach all parts of the body cleansing and toning as they go.

Garlic is particularly effective in respiratory infections as its infection fighting volatile oils are readily secreted from the mucous membranes lining the lungs. Hence, if you cut a piece off the clove and put it in your shoe, within just a few minutes the odor will be detectable in your breath. This remarkable herb can help heal external wounds and draw pain. A mashed clove or garlic oil may be applied to wounds, abscesses, swellings, etc.
Raw garlic at full strength can burn, so it is best to apply olive oil to the skin before applying the garlic. Warm garlic oil has also been used in the ears for the pain and infection of earaches.
Many people are resistant to trying enemas, but garlic has been used very effectively in an enema solution to help combat amoebic dysentery, high fevers and even mononucleosis. Crush the clove, blend it in a quart of water, and then strain it carefully before putting in an enema bag.

Ah, but what can we do for that one side-effect of garlic—foul breath?
Chlorophyll is a natural deodorizer, helpful as a mouthwash or just to drink. It also has infection fighting qualities of its own, while building the blood at the same time. It is thought that the magnesium in the chlorophyll is the agent that neutralizes the strong sulfur compound that is not only offensive to the nose, but deadly to infections.

Parsley is rich in chlorophyll and is also known as a natural deodorizer.

Lymph Gland Cleanse formulas are developed by Stan Malstrom for fighting “Infection in the Glandular System” meaning the lymphatic glands or lymph nodes. Whenever there is swelling in the lymph nodes of the neck, throat, armpits, etc., then these formulas would be good choices.

Lymph Gland Cleanse contains two of our major infection fighters: golden seal and echinacea, plus yarrow and capsicum. Yarrow is a powerful antiviral and anti-inflammatory agent.

IN-X is a powerful “INfection-fighting” formula developed by the famous Dr. John Christopher. It also contains golden seal and echinacea, plus black walnut, marshmallow, plantain and bugleweed. This is a much stronger infection-fighting combination for most people and often proves helpful in chronic, low-grade infections.

IF-C TCM is a Chinese combination which acts as an anti-inflammatory. It’s Chinese name “Qing Re” literally means “clear heat.” Its principle ingredient lonicera flowers are considered antibiotic, fever reducing and anti-inflammatory in Chinese medicine. It is indicated in colds with fever, flu, sore throats, earaches and other “hot” infectious conditions.

If a wound is infected, it may spread until red streaks can be seen under the skin surrounding the wound. It may also swell and develop pus in the area of the wound. Tea Tree Oil is one of the most powerful topical antiseptics in the herbal realm. It may be applied every half hour. Its oils will penetrate through the skin to help fight the infection. The oil has been shown to kill staph and other micro-organisms even in fairly dilute solutions.

Garlic oil or Tei Fu oil may be used as alternatives if Tea Tree oil is unavailable.
It should be followed up with Golden Salve to complete the healing process.

Black walnut extract is also helpful for some types of skin infections.

Toe/fungal infections – use Silver Shield and place the drops under the affected nail. For even more effective treatment, do the Silver Toe” dressing, since the silver needs to be in contact with fungus for 10 minutes to kill it. Therefore, we need to get it below the nail.

* Scrape or sand the top shiny layer, making the nail porous
* Soak a ½ inch thick cloth in silver shield to create a toe dressing
* Tape it over the toe so the liquid can soak into the nail
* Tape a little baggie around it so it doesn’t leak; leave it for at least 10 minutes, or overnight for even better results
* Use clean duct tape to keep it in place (yes, it really works!)
* After 10 minutes, the dark fungus will be lighter, and this treatment will be effective for 48 hours.
* Do this 3 times a week, or every other day.

This information is for educational purposes only. Consult with a qualified health practitioner for all serious or persistent illness. Copyright © 1990 by Robinson & Horne, L.C., P.O. Box 1028, Roosevelt, UT 84066. This material may be duplicated for educational purposes only (not for resale) provided it is not altered in any way.
Distributed by: Webnat.com and Four Winds Nutrition.